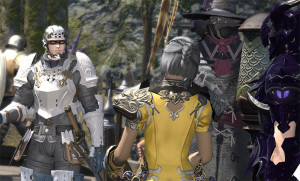 My character cameo in the FFXIV Benchmark

It was nearly three years ago when I first got swept up in the hype that was FFXIV. It was around that time I had grown tired of another venture into the original Everquest and regrettably had to put it down due to populations on the progression servers dying out.

I had heard lots of great things about FFXI, but never got around to playing it because that was when EQ was still in it’s hay day and I had SOE tunnel vision.

When FFXIV was announced I Jumped right on the hype wagon and started theory crafting weeks before launch. I downloaded podcasts, spreadsheets, desktop backgrounds you name it, and when the game finally launched it went off like a cartoon catapult that flung neurotic patrons into the dirt of poor game design. The original team that worked on the game strung together an unfinished landscape and a cardboard story line with virtual duct tape. Now I think most of us could have dealt with the repetitive terrain and insipid story if there had been a decent amount of stuff to swing a sword at; but alas even the spawns were unfinished, making leveling just not realistic for most people. 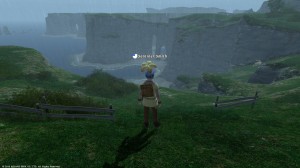 Beautiful yet repetitive landscape of the original release.

Fast forward about a year, Square Enix has announced they are rebuilding FFXIV from the ground up… I was dubious, fool me once as they say. But then I started to read a bit more about how drastic of a change they meant to make to the game and I started to take them seriously again. SE had not only begun to piece together a solid game but they fired the whole original design team, ouch!

So here we are three years later and I’ve allowed myself a measured amount of enthusiasm. This enthusiasm is partly due to the fact that any player that owned an original copy of the game from 2010 gets ARR free! Wooo!

FFXIV has always been a beautiful game, it definitely ranks in the top 5 best looking MMORPGs on the market. If you haven’t taken a look at the game recently I implore you to go and take a peak. In fact if you have a reasonably powerful computer you can run the official benchmark, it’s available for download HERE.

With a new paint job, fresh story, remodeled cities and characters you can expect FFXIV a Realm Reborn to be giving other MMOs a run for their money this year.

We’ll be sure to bring you much more info once the NDA is lifted.